I’ve been playing about with the MiniCNC a bit, I’ll log my work in this thread so people can learn from my mistakes!

I’m trying to get to grips with using Fusion360, I’ve not used it before but I’m picking that over Vcarve because I want to be able to work on the designs when I’m not in the space and I’m on a Mac. Make sure to watch Kyle’s Fusion360 video to see how to use it with the MiniCNC.

I’ve got some offcuts of hardwood that I’m using for the experiments.

I used the second technique shown in this super helpful tutorial. Having to create a fake endmill that is actually a V bit seems wrong, but it works!

You can see I didn’t get the depths quite right, probably a bit off when touching off on the Z after a tool change. 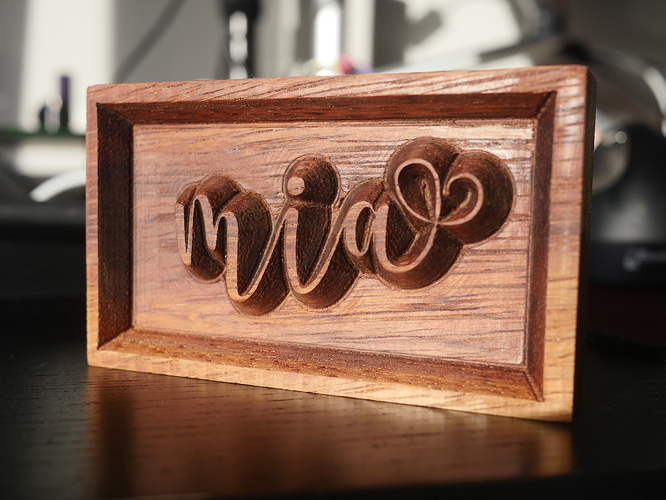 I tried to carve a heightmap of some geography but I wasn’t very impressed with the result. I think I need to exaggerate the features more to make it more obvious what it is, and use finer bits to keep more of the detail. I was pushed for time and so after the rough clearing I opted for the 5mm ball end mill, the 2mm might have been better but would have taken a lot longer.

The big mistake I made was that my origin was set to the top corner of the stock and that got milled away in the first path. This left me with no reference point to touch off the Z on after a tool change

. I lined it up best I could by touching off the Z with an offset and then jogging the spindle around to check it lined up with the toolpaths shown in LinuxCNC. Impossible to get it completely accurate though. 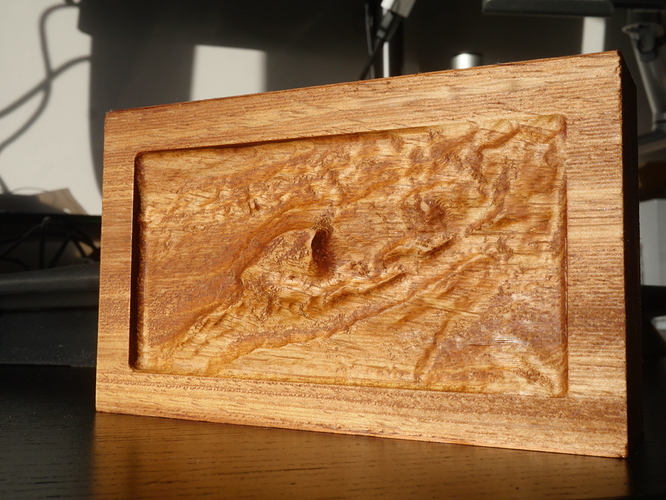 Really cool! Thanks for sharing! The name brick is beautiful!

One thing that you could have tried (not sure how accurate it would be) was to touch off where you milled and put in an offset of what was milled away if that makes sense. You see the offset option in the touch off dialog.

We do still need to do a final calibration on the Z-axis on both CNC machines though! They should be close, but we have only dialed in X,Y to be super accurate…

For anyone that wants to replicate this in VCarve, here’s a tutorial on how to do it too! https://www.youtube.com/watch?v=reEIXOBTL64