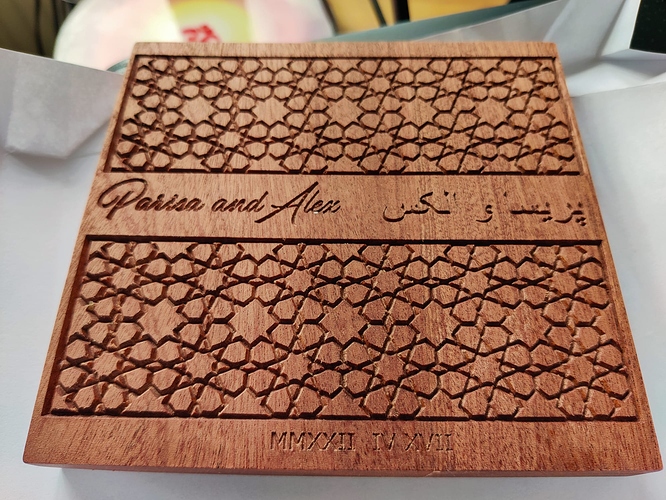 Sapele wood 13.5 x 14.5cm. Started w/ 100mmx25mm PAR planks. Pattern comes from a cool picture I found online, cleaned up and vectorized in inkscape. Ran on the CNC mill w/ a 60 degree engrave job (my own tool, but ran on the makerspace’s mini-cnc). INVALUABLE help, guidance, jokes, company, contributions and supervision by @kyle and @Julia . Took a bit more than 30 mins on the CNC.

All in all not bad! And this is the shortest turnaround I’ve ever had. I had done some image research ahead of time, but considering that I didn’t even know what the final pattern was going to be when I came in, to leaving w/ a finished piece later, yeah, not bad. It really helped to have other people to talk it through with.

That looks great Amit and thanks for the write up, it’s great to learn from your experience.
I recently got inducted to the CNC so I’m eager to make something. Where did you get wood that you used?

The Balham branch of https://fulhamtimber.co.uk/

This is awesome @Amit_Kohli! Great job!

I think this is one of the best real projects off the mini-cnc, very cool! FYI for other CNC users we have some V-bits for the space coming soon!

I saw this being designed in the space yesterday. It’s so great to see the final product and looks beautiful! I’m sure they’ll love it!

Thanks for going into such detail on your posts Amit, it really helps to get a sense of the project and also learn from your ‘mistakes’. Looks great and had I not read the thread I would have just assumed everything went to plan.

I’m actually kind of sure that nothing went to plan :D… but I guess when Julia and Kyle are hanging around, there’s nothing unsurmountable. All credit really goes to them.