I got a couple of nice saws, I was assured I was getting a crosscut, I got a rip. The advert then stipulated crosscut, I got in touch and checked it was definitely crosscut, it is a rip. 120 of these saws have been sold, I am the only person to notice they are rip saws not crosscut. They walk among us.
The most recent saw to arrive was as blunt as a Bernard Manning put down. So I set about turning it into a crosscut. I phoned garlic and son to find out the rake angle, and the person I spoke to told me that they are hand sharpened?She also told me that she is fond of fried food and once had a crush on Jamie Theakstone. However, no tooth geometry was forthcoming. I think this proves that garlic and son are a top notch outfit and destined to grind the likes of lie Nielsen and Veritas into dust.
Anyway the rake is about 12 degrees as far as I can make out. High for a rip tooth but perfect for a crosscut. I decided to put 15 degrees of fleam which is a jack of all trades. I jointed the first saw, raced ahead and wasn’t happy with what I got. I then reshaped the teeth back to rip. It turned out really well despite the circuitous route. I decided I would concentrate hard on the other saw. I coloured the teeth with Sharpie and then lightly jointed the saw. I realised I was getting a bias on one side of the file which had cut some of the teeth small ( I realise that crosscut teeth appear one small one big, this is an illusion, what I had got first time round was teeth literally smaller than their neighbours, visible by holding the saw up to a bright light with a straight edge touching the teeth, showing some teeth not touching the straight edge) I concentrated on removing an equal amount of metal from both teeth and I did much better. I screwed up the first six teeth below the handle, it is not a big deal as I know why and they don’t get used. I forgot to flip the rake guide around when I turned the saw around. I had always wondered why people write on their rake guides. I never used a rake guide or put a handle on my file before. I thought about the rake. If you don’t use a rake guide, you are trying to align the top of the file. It’s 9/32 wide and it’s not horizontal, you can’t see either of the file edges cutting the teeth. It would be easy to align the file wrong I think plus or minus five degrees would be good going. That’s a rake which may vary from 8 to 17 degrees. That’s a big discrepancy. With a rake guide you just align a two inch long piece of wood with the top of the plate. I think it would be realistic to expect a variance of less than 4 degrees. I actually think it’s more like one or two degrees. You can see the rip saw teeth confirm this. They are in the bottom saw. I found using a handle gave me much more control, definitely something I will continue when sharpening high tpi.
The next two or three sharpenings I will sharpen those six messed up teeth in a rip configuration, until they are the correct size and shape. Then I will sharpen them in line with the rest of the crosscut teeth. I learned a lot from doing this, both the saws cut beautifully now, I just thought cutting crosscut teeth would be the same as sharpening a crosscut. It’s harder than sharpening a crosscut. 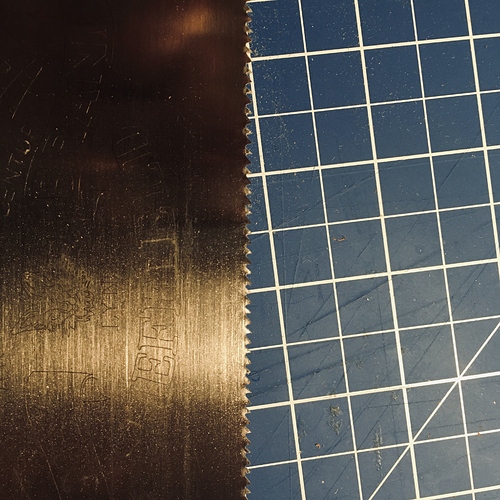 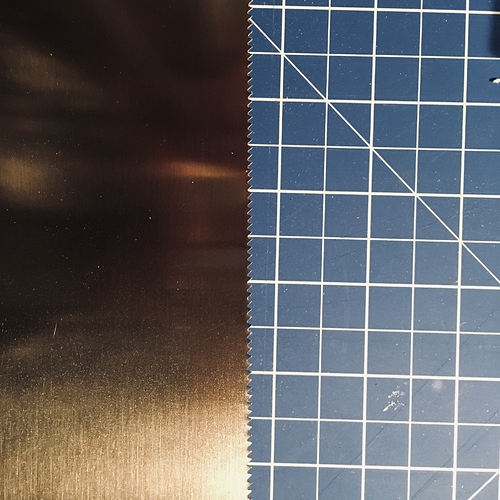 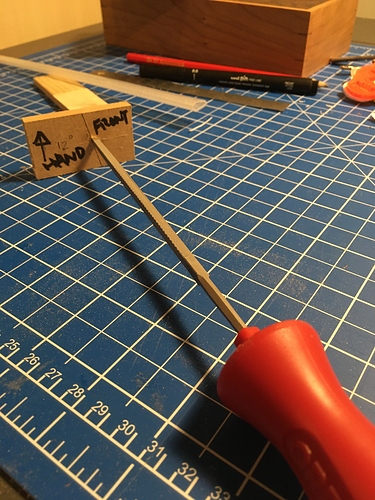 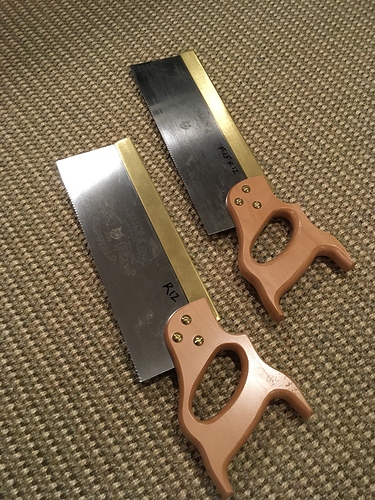 Whilst I’m on the waitlist I’m thinking of making a mini workbench and doing some hand tool woodworking in my flat. Saws are high up on the list of handtools I don’t really have (super crappy ones!). The thought of having to sharpen western saws for them to work well, plus the cost, was a bit intimidating and was making me think I might try out Japanese saws. Do you think this is a fair worry or have you found sharpening not too difficult? Is the kit expensive to do it? 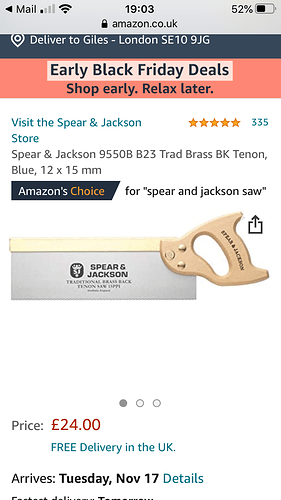 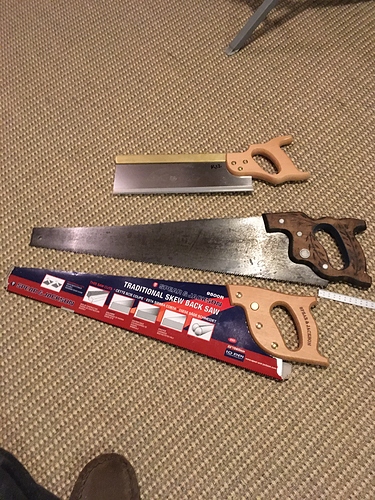 image.jpg3024×4032 3.38 MB
I got Japanese saws to begin with, because they are a little bit cheaper. I really don’t like them though. I repeatedly failed to make accurate cuts and found them hard to control because the super narrow kerf doesn’t allow adjustment when they start to wander. They have to be used with the wood laying down, starting the cut from the back and bending the blade to whichever side you need to steer. They also nearly all fail to cut properly in certain hardwoods because they are primarily set up to cut softwood. So I tried a European style saw and really noticed a huge improvement. If you want a decent saw spear and Jackson make some perfectly functional saws which are as cheap as you will find. They can be sharpened. They come with crosscut teeth and the one I have arrived sharp. A rip tooth tenon saw will make perfectly decent crosscuts. A crosscut will only crosscut. So you could change at least the tenon saw to rip teeth it’s not that difficult. You need a flat file with a fairly smooth cut and a saw sharpening file sized to the saw. If you got the spear and Jackson tenon saw you would need a bahco double extra slim saw sharpening file. They cost 12 pounds including postage. I got mine from Redbox tools. They stock all the bahco saw files and are a couple of quid cheaper than workshop heaven. My flat file is a junk shop find. I use a rip cut tenon saw for almost all cuts, rip and crosscut, 13 tpi. Anything around 10-15 is good. I also use a spear and Jackson crosscut panel saw, super cheap and very good, 10 ppi. A use a disston rip saw 6 ppi. With three saws like this you can do most things. You could just get away with the spear and Jackson tenon saw change it to rip teeth, it’s really not that difficult and is much easier than crosscut teeth. Get the spear and Jackson 9500r as in the picture and change that to rip, then you would be able to do most things with two saws. It’s a compromise of course. Feel free to ask any further questions. I have tried to answer as well as I can, it depends what you want to do really. The spear and Jackson tenon saw is the 12 inch version I think. They also do a ten inch version which you will find for a similar price. If you are good with your hands I expect you will be able to change a saw to rip teeth. Do your research first and make sure you understand what you are doing. I have seen lots of saws sharpened by people who didn’t have a clue what they were doing. You will certainly fail if you go that route. Oh yeah, you would need a different file for the larger saw. Try out a Japanese saw. I have one I would sell you cheap, with two blades, rip and crosscut. It’s the hassunme z saw. I don’t need it cause I have a gyokucho ryobi .

You would also need something to hold the saw. I use a couple of bits of mdf in a workmate. 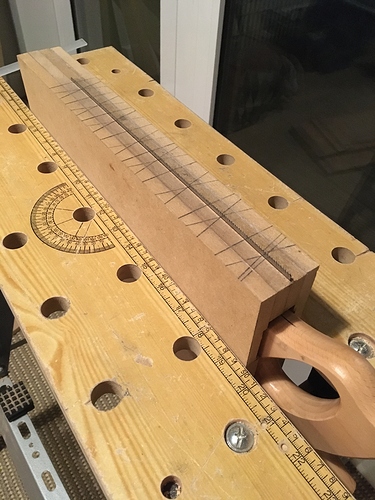 Thanks for the super detailed answer. You make a really good case for the western saws and learning to sharpen them would be a great skill to have! I also like your approach of whittling it down to the couple you need, so many sites will tell you that you need 10 options! It very much aligns to my principles so far of limiting the total set of tools but buying good ones.

I’ll get on the research of options, do some reading about sharpening and put something on the xmas list (although it might be a gift for myself!). In the meantime, I’d be very tempted to take you up on your offer re the Japanese saw you have, let me know how much you’d like for it

You can have the saw with the extra blade for ten quid. The crosscut blade is the one I use most often and is most suited to softwood and things like Cherry or Sapele or anything not super hard. It’s also very good for mdf. The rip blade has had a few microns of the set removed by me. Both the blades have plenty of life left in them. A bit of wax on the blades helps. I am in Greenwich, If you want it let me know.

Sent a separate message re the Japanese saw (am keen).

Have also done some major procrastination and got very into the idea of getting the Spear and Jackson you suggested and then following the suggestions of this video to: