A relative has a Asus ROG G531G which doesn’t turn on anymore. He has already replaced the battery and stuff but it’s still not working.

It’s likely to be a short circuit or damaged component which are very commonly reported with this model.

These are pictures (from YouTube) of the possible Mosfets or ceramic capacitors.

Also, has anyone used a thermal imaging camera for these kind of diagnostics before?

Help would be much appreciated

I did in the past, I don’t own a thermal camera but I used them in the past

However, I can suggest that the crucial diagnostic is detecting the short, which can be done with a standard multimeter.
If you wish to verify the damaged component by heat this needs to be done while the board is powered (potentially dangerous) or voltage injected which could be fiddly.
A temperature probe could also be used if you want to do that. Some people use their finger to detect the heat (only do this a low voltages!) Or squirt some non conductive solvent or equivalent and it will evaporate quicker in hot areas, similar to what is shown in the video.

The alternative is to make a guess at which component has failed, replace it and see what happens, this is a valid approach. Or replace eg. all capacitors connected at that point.
With capacitors it isn’t easy to know which replacement values would be ok, using one of the same type if others are in parallel could work.
This is a common failure mode of tantalum capacitors, so they would be a likely culprit.

It’s not a straightforward task by any means but it is possible.

I have a FLIR module I can bring in when I get back. The firmware for the STM32 likes old Ubuntu but I can probably get it running again.

has the manufacturer / reseller refused to repair it?

As far as I know it’s out of warrenty.

I tried myself on some soldering yesterday using the tweezer, hole air gun and soldering iron.
This is my first time doing this so don’t be too harsh in on the critique 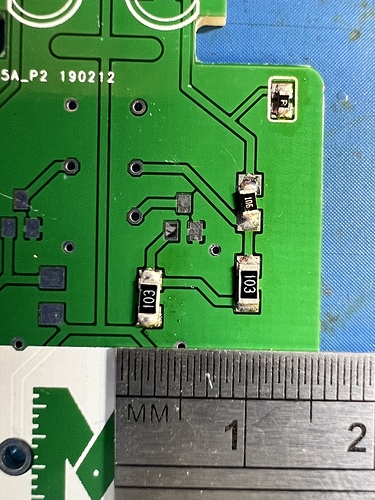 The right one was my first try but I used too much solder and is not sitting nice and flat the other ones I used less solder.

Do you put solder on the components as well as the board?
Also, any tips on how to get very small blobs of solder on to the tip of the soldering iron reliably?

You need more flux, the quantity of solder it’s fine, you just need the flux to make them more evem

Like others have said a multimeter is your friend here, if you can narrow down the fault, its almost easier to just remove 1 component at a time to test them. Soldering is pretty forgiving, and the components are not too tiny, its should be doable to put the capacitors back on the board. To be honest the biggest issue will be to disassemble the laptop without breaking anything.

You can also spray the board with an aerosol which freezes it. When you power the circuit any broken components melt the thin layer of ice first as they overheat. (Maybe that’s what’s happening in the video you posted, I haven’t watched it yet.) I’ve done this before to troubleshoot a circuit, and it can be useful though of course keep in mind that ICs and voltage regulators also get hot quickly in normal use. You can buy the cans at RS Components or similar.

I have this guy if you want to borrow it to check components?

Oh, yes please? I am at the space tonight if you’re coming

Ya will try to bring, will be late night…

we have one at the space too i think

I’m curious to know how youre getting on with this project Julia?