Since I didn’t need the 100 micron lapping film for my stones, I thought I would do a little flattening. If you are new to plane flattening and buy a new plane, know this, your plane is going to change shape. Completely flattening a new plane is a waste of time. Better to get it somewhere in the ballpark and leave it for six months. After six months of use, then continue to get it perfect if you like. You don’t actually have to get it perfect, as long as you get the toe, heel and the front of the mouth co- planer it’s good to use. If you don’t have a truly flat surface the whole excercise is a total waste of time and will screw up said plane. The table saw has a flat surface, although I think it would be polite to get permission if anyone uses the space machines to lap upon. I am knocking some rust off my scrub no5, I don’t care much about the flatness of the sole. It’s not that important for a scrubber. I have a block plane which I will be attempting to get flat. It’s the second flattening of the block plane. It was totally flat, it changed shape and is now convex across the width. I have a back up no 5 which I am going to do a little work on. I am also going to do some work on my quangsheng no 5, it is made of alloy steel and is the easiest plane to flatten, not sure if that’s because it was flat to start or due to the metallurgy. According to Paul Sellers we just spend ten minutes on a roughly flat surface and bingo, we have a flat sole. Believe that if you want. I prefer to take my cues from reality. I have measured the discrepancy in my planes and then measured again and again. In ten minutes it’s doubtful you will even be able to discern any measurable difference. It does make a difference though, especially when planing long boards, if the sole is concave ( pretty much every plane, any plane supplied with a convex sole should be returned) it won’t cut in the middle of the board without skewing. Skewing lowers the angle of the blade and if the wood is tearing out, you will be screwed, lowering the angle will make the tear out worse, usually. So I will be spending some time on this. I am going to stop when I have exhausted the lapping film. I basically want to get my main no5 and my block plane done. The quangsheng is easiest.
After spending some time on the quangsheng I have most of the sole flat. To get an idea of what ten minutes lapping gets you, the wear caused by using the shooting board is deeper than the amount of metal I just removed, I won’t be trying to get the final bit of sharpie removed. The bulk of the sole is really flat, the plane is already functioning at a very good level. I will feeler gauge this later and I know from experience, my thinnest gauge will struggle to take a measurement, if at all. This plane was only a couple of thou out to begin with and only at the very extremities of the mouth, and that minute adjustment took ten minutes. I have done a bit on all of the planes. The block plane is a mess from a theoretical point of view. It works very well so I really don’t care ( Japanese planes can be set up with only two points of contact on the sole, in front of the mouth and at the toe, they still work like this). My back up no5 has deep scratches but it is flat and works really well. The Quangsheng is really flat and is a text book example of a flat sole . The scrub plane works really well, it’s easily good enough and flatter than it was this morning. So, horses for courses. I don’t particularly want to spend several hours lapping a block plane back and forth. I actually did that previously and I got it perfect. It took hours over approximately two months. Yes you read that correctly. The sole was 0.8 mm out. I put it by the kettle and lapped 200 strokes every time I used the kettle. It took two months. I drink a lot of tea and I lapped the plane as though my life depended upon the outcome. It was absolutely perfect when I finished. Six months later it had become convex. So I won’t be doing hours of lapping. I can accurately and efficiently dimension timber and achieve any realistic cut with these planes. Each plane is set up to the level required for its task. I don’t care what it says in magazines or books, my planes function and that’s what I care about. When I made my shooting plane, the oak sides could only be planed without tearing out, by taking shavings in the half thou range. The Quangsheng did that reliably. A little lapping does yield noticeable improvement ( the ability to take a thinner shaving) I am not stressing over it though. 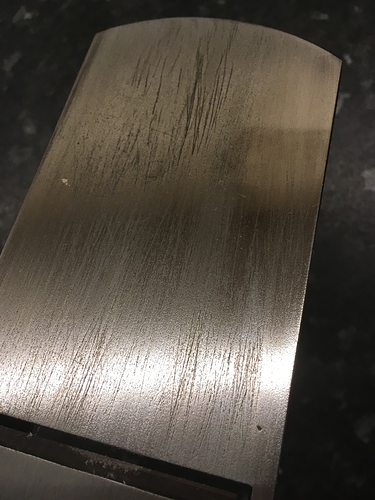 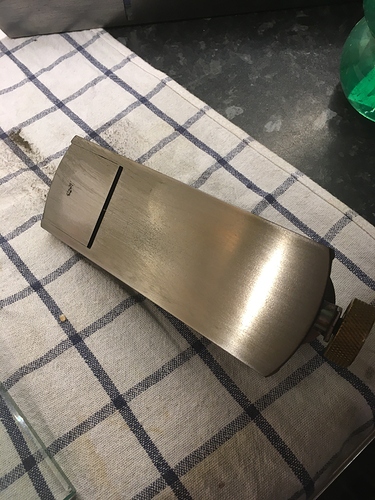 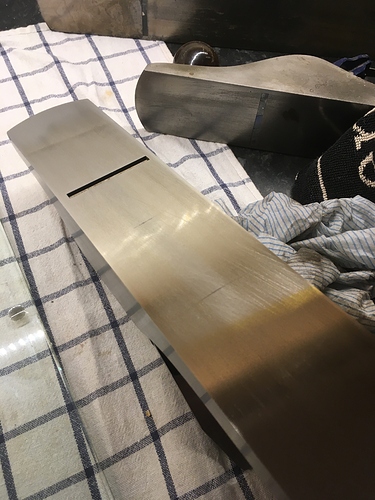 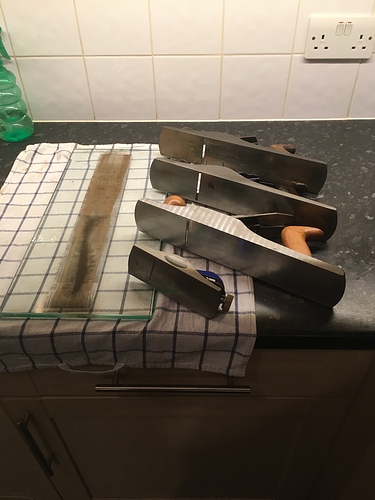 Yeah, very nice. The soles tend to be quite flat, it’s the big plus point of a quangsheng. If the sole is a banana you can get a replacement. They make a point of the accuracy of the sole. It’s supposed to be better than the British standard according to their website.

Found an old record no5 1/2 left in the shed by the previous people in the house share. It’s in pretty bad knick but possibly salvageable.

My record planes are vintage. One of them is 70 or 80 years old. It was made for approximately five years after the war. It’s got a flat face on the frog. The record block plane is new. It’s well out of true and it was absolutely perfectly flat about two years ago. I was really shocked when I saw how much it had moved. The record with the scratches is very flat and it works great but I spent a lot of time flattening it previously. I would like a no4; I would rather get something decent, if I buy a second hand plane I will only do so if I can see the plane in front of me. I definitely won’t be buying a regular plane mail order. The Quangsheng was from workshop heaven and it is not accurately machined as they claim. I bought it to shoot accurately. It’s completely screwed literally. The geometry of the side is such that as the heel of the side makes contact with the shooting board it cork screws. On top of that even with the entire plane on the board it requires so much lateral adjustment to shoot 90, the lower part of the blade is inside the body. Accurately machined, my arse. The sole is flat though… ha ha ha. Trying to get hold of a really good plane is not as easy as it might seem.

As long as the sole isn’t to bad plane restoration is a good option and the results are worth the effort usually. Depends on the level of rusting, you can purchase really aggressive products which basically dissolve rust.

So your block plane has arrived. I am guessing that because of the size, the tolerances of the machining will be much better than my Quangsheng no 5?

I’ve only got as far as unboxing it, and checked that the adjustable mouth is flat to the sole. Which according to my sophisticated natural feeler-guages (aka fingertips) it is. From initial inspection it’s by far the best quality tool I own. Which admittedly might not be saying much!

It stands to reason that the smaller planes are the most accurately put together. Machining six inches of metal has got to be easier to do than 14 inches.

As Marc said, these new planes have really decent flat soles straight out of the box these days. Of course the real test is simple. Does it work? If you can take a nice thin shaving, result.

And as you obviously realise, the area around the adjustable mouth is always the area where the sole may have a little bit of movement. My low angle block plane is no exception. It’s still perhaps my favourite plane. Partly because I had to go to extraordinary lengths to get it working and part because it is such a handy, pleasant tool to use now. It fits perfectly in my hand. Can you post a picture of the Quangsheng?

Here are a couple of pics. I’ve not had time to get really hands on and prep it yet, but it does feel well made.

A quick check with an engineer’s square shows the sole is totally flat from front to back, but it is slightly concave across its width apart from at the mouth. 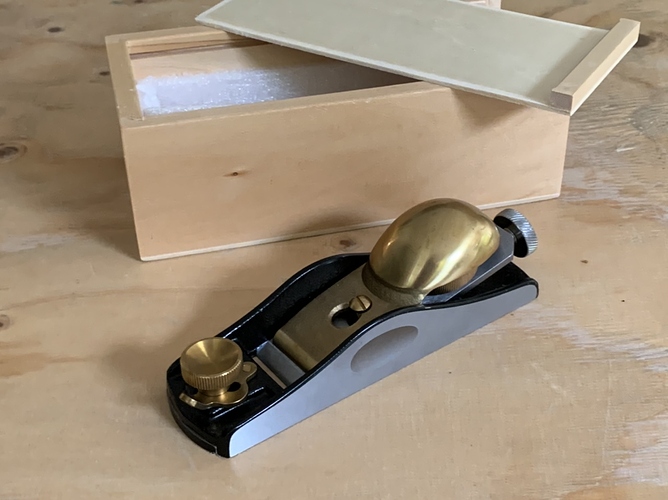 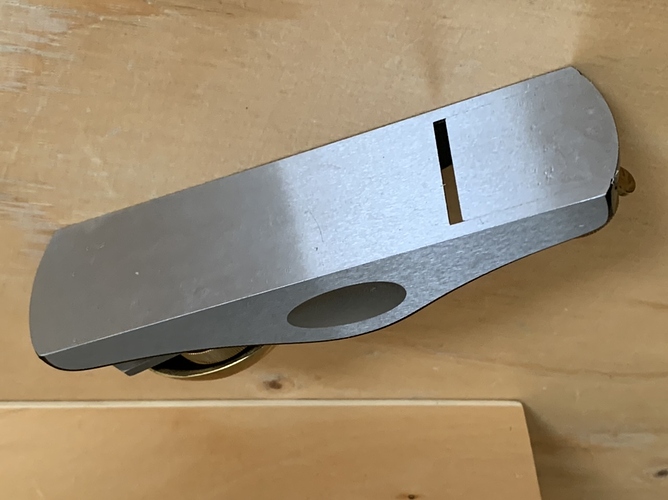 Lovely, I had noticed slight difference between the Quangsheng planes, from one outlet to another. Currently Bills tool store sell a Luban no4 smoother for 125 quid. Luban is a name sometimes used to describe the Quangsheng planes. Anyway, Bills tool store version of the plane has a bronze lever cap, the workshop heaven version is 20 pounds more expensive and features the steel lever cap. I really don’t know if there’s a significant difference in functionality between the two, the bronze lever cap certainly looks nice. What you have is a good tool, as Marc says, the soles are so good now that you may well have something so good, flattening on anything other than the very best flat surface will be a step backwards. You know that a set of feeler gauges cost approximately five or ten pounds, even less. The tables at the space are flatter than I thought initially. I actually checked with the veritas straight edge and some feeler gauges. I thought I might try something a little different for my no4, wood river. Rob Cosman uses a shooting board as a matter of course. The latest no4 is developed with his input and he has pointed out the importance of accurately machined sides in order to shoot accurate 90s. From what I can glean from woodwork forums the latest v3 wood river smoother incorporates the better accuracy machining. It’s a 150 quid plane, about the same as a Quangsheng. I would prefer pay 30 quid for a vintage version, I would need to see it in front of me. If you know of anybody who has a spare smoother let me know. Also I am sharpening saws, restoration etc, ditto what I have previously said. I am changing a rip to cross cut and I will post the results. I am also completely filing the teeth off my ripsaw and cutting new teeth. I will post this as well.

It really does look the part. Care and attention to detail makes such a difference. It’s like eating with ones eyes. We all do it and it massively informs what we subsequently claim to taste. Your block plane looks so good I might forget to take a measurement or two, however the real test is simple. Does it cut wood? I am guessing yes.

Maybe order some Chianti and some fava beans.