Greetings,
Space cadets, one and all.
I have been building my very own woodworking bench. It is truly bespoke and entirely tailored to my needs and body size. I have stipulated the true nature of the bench because much like the word "vintage ", bespoke, and other similar words have very little value these days because they are misused to such an extent. Personally I don’t indulge in wanton destruction of the English language. I don’t have time since I started my vintage tea bag business. Only ten minutes ago, I spotted a rare example in my bin. Its extremely rare due to the heat present in the actual body of the tea bag. The same thing happened this morning and to think I had just drunk a cup of tea. Mmmmm donuts…
Anyway, I started the bench in the summer and once I got it home I ceased working on the bench! Because this is my dream bench and it existed in my head for 4 years, I have found it difficult. However I have managed to create a real object which measures up to the bench I imagined ( I worked from a full size drawing I made and the bench exactly matches my drawing. I have made some minor changes. ). I have made all the decisions that needed making and now it is just a matter of bringing the project to a conclusion.
I have created this post because I wanted to show just how good the bench is and its not even finished yet. I used the vise prior to gluing or screwing the jaw together, I was very surprised that the vise even worked. I thought I had produced a vise which was not going to work. That would have been a devastating and epic fail.
The face vise is the beating heart of the bench. Thankfully it is very effective. I am jointing the edges of the boards which will make up the benchtop. It’s a split top Nicholson. As you can see, jointing this 7 foot board is accomplished with ease. Prior to using my bench, I precariously jointed the long boards using the set up from a school bench and of course the boards flexed held only by a small area of the vise jaws. This is just one example of why I chose to make a nicholson workbench. The board in the photo had highly visible cutter marks from the planer. I don’t like to see them on any show surface. Even on the inside of the gap making the split top.
Jointing a board using this bench is a beautiful and pleasing experience. And therein lies the reason to make my bench, function, function, function. This bench is a precision tool with a much higher level of functionality than a school bench which, is in actuality, the equivalent of a value range in the supermarket, ha, ha, ha. I did plenty of stuff using the school benches so I should say thanks and much gratitude, and I am grateful. The school benches are bomb proof and reliable, nostalgic even… 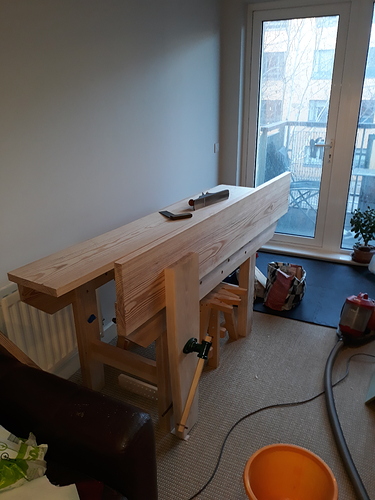 That’s very nice, Giles.
The proportions remind me of the bench my mother made, which had to fit inside our small garden shed…
(she was a very keen maker, across a multitude of disciplines); I do wish I still had the bench, although tbh it - and most commercially available benches - are a good ten inches or so too low for me!).

The picture is probably giving a false impression of the actual size. The bench is 574mm wide x 1754mm long. It is basically one arm span wide, 22 1/2 inches x 69 inches long.

Ok - thanks Giles.
From memory ours would have been maybe 500 x 1200, maybe just a touch smaller, with a few features I hadn’t seen before (I was still at school) and storage beneath.

I missed the point that you hadn’t completed the top, and was thus struggling to fully interpret the picture… (at first I thought you had a long, very narrow bench top and so I couldn’t make sense of the base and leg vise!)

Very nice! I think I’ll make a Nicholson too one day. I like the idea of a Roubo but it’s just so much wood!

Most people seem to think the roubo is the bench they want. I took one look at a nicholson and I new instantly that I was looking at the bench which would suit me. The Nicholson does everything from the get go. For instance, a sliding dead man is largely redundant on a nicholson. The same is true of one of those vices for dovetails, the name eludes me. Basically the apron is already one half of a dovetail vise, and a couple of hold downs and a piece of wood create the other jaw. I really don’t know why most people favour the roubo. And as you mentioned, the roubo requires a lot more timber.

The same is true of one of those vices for dovetails, the name eludes me.