I got my beautiful garlick and son tenon saw. The guy who ran the add on eBay didn’t specify rip or crosscut. I asked and he said crosscut but, it’s a rip cut. I can find no trace of fleam. Anyhow I am not unhappy, it’s nice and heavy, about 700 g, ( Japanese saws have little weight obviously) it makes beautiful crosscuts as many rip saws will. It’s got 15 tpi so it would cut nice dovetails ( it’s a 12 inch saw), if I was gang cutting a chest I would seriously be happy to use this saw because I find the size gives me really positive alignment. I think I will get a Veritas crosscut carcass saw 10 inch I think. Then with a dovetail saw I will have a very good set of saws. Five saws which will do virtually everything. I don’t like my Japanese saws because they just don’t perform all of the time. It’s impossible to know from ripping to cross cutting, from species to species. Is the saw going to cut, is it going to cut true ? Cutting oak for my plane project would have taken for ever with the crosscut on all my Japanese saws. They cut oak as though blunt. Ripping the Oak I was using was difficult because the set and kerf are so tight it is impossible to correct drift, so I have to lay the wood flat and lower the angle of the saw to gain control. It takes forever sawing like this. Cutting the blade bed for my shooting plane was really over complicated and innacurate with the Japanese saw. Cutting a blade bed with this saw is simple. European saws were made to cope with the typical timber we use and using them just makes total sense in my body and mind, so I am changing all my saws to European. Sharpening is another reason I like European saws, it’s easy and the thicker plate is less likely to bend in transit, or lose a tooth. Impulse hardened teeth are fragile as are the Japanese plates. The modern obsession with thin saw plates and minimal set is completely spurious. The kerf has a function should the cut wander. I have total confidence in my ability to saw straight in the wildest grain with European saws. I will still keep my Japanese saws but I don’t think I will be replacing the blades on the majority. I particularly like my mini crosscut gyokucho it’s a very useful saw for details and flush cuts are easy with a ryoba or kataba and a sheet of paper. I think that speaks volumes about my reality with Japanese saws. I can only think of three uses which I will happily undertake ( kumiko cutting also)Five saws; 5 tpi rip cut panel saw.
9tpi crosscut panel saw.
15 tpi rip cut tenon saw. 12 inch
15 tpi crosscut tenon saw. 10 inch
15/20tpi dovetail saw. 8 inch 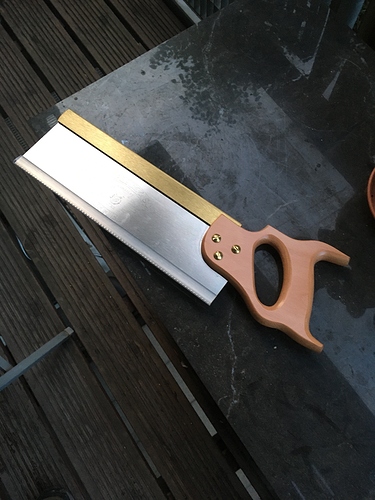 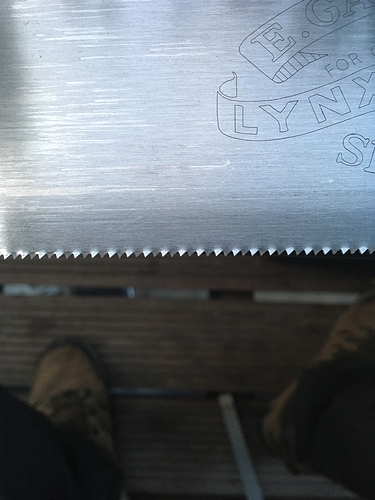 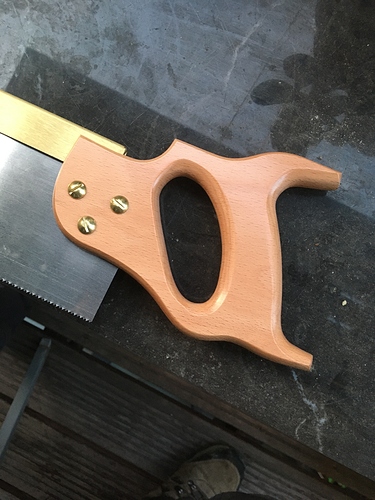 I have learned something really valuable with this saw.
I bought Japanese saws to re visit woodwork because I saw they were being used by a great many people and were rated highly. I did own a dozuki thirty years ago and I did use it. They are also the cheapest new saws in general terms. So I very quickly got a reality check. I have used almost exclusively reclaimed timber, I have used mainly Pine and Oak floorboards. Crosscutting Oak is really ineffective, across three different types of Japanese saw from two makers. The tooth geometry is all wrong and it’s not just Oak where I have had issues. Admittedly some woods cut okay with the Japanese saws but a European tenon saw cuts all wood really well with virtually no exceptions. Ripping Oak floorboards was nothing short of disastrous because the plate is not free enough in the miniscule kerf to make sufficient adjustment to counter the drift. I realized just now that all the comments and buzz words associated with Japanese saws were not generated by me or my experience. Laser like cutting no, it’s on workshop heaven I believe. Add to that all the hype etc on the internet and in magazines. My true experience of using Japanese saws has been more problematic than satisfactory. Without doubt my real world experience was completely wanting. I had been searching for my old confidence with saws, and never got that total feeling of knowing I was cutting true; without having to micro manage the saw cut and really concentrate on keeping to the line. I just made a couple of cuts with the lynx saw and it just happened as if by magic. I can cut true and accurate to the line without having to think about it. I just know that I can start the cut without processing the procedure and it will be right where I need it. One chisel shaving from the line, done. And this is true also. After making some test cuts I looked at the resulting kerfs and thought they were laser straight. I have never thought that about my Japanese saw cuts. I have actually thought how rubbish the kerf was, in a project which needed a saw kerf to allow for a pencil insert. Making the cut was extremely challenging (seriously, I had to mark out and make a test cut because even cutting a true two inch straight line with my rip ryoba in Oak was a challenge) I was really disappointed with the performance. It’s all hype, my experience has not been what I read, nothing like it. In comparison to Japanese saws it feels ike a magical ability using the lynx. Of course I am going to save time and effort with my re found hand skills. Crosscutting to a knife wall is not that hard at all with a twelve inch tenon saw. Cutting right up to the knife wall plus four shavings on the shooting board. Fast and accurate and most importantly easy, accomplished with total confidence in the result. This is a huge moment for my woodworking. The accuracy and confidence in my ability were not gone, I was a victim of clever marketing. I can’t wait to try some dovetails. The dovetails I cut with my Japanese saw were as good as any I ever cut but I really had to concentrate (another lockdown project ) It can be an effortless process with the right saw. All kinds of options had been blocked by the Japanese saws and my consistent difficulty using them. I had spent two and a half years searching for this outcome. My approach to woodwork is all about simplicity and preparation. I am so glad that I finally called time on the Japanese saws and faced up to the reality of their deficiencies. And in Japan I have seen woodworkers using European style saw’s which is kind of funny. I don’t say that this is the only experience. But it is my experience, European saws rock and they always have. I am reading a book on Japanese woodwork and I will try some of the exercises for kumiko, it’s one very specific area where Japanese saws offer some advantages. Have other people experienced similar issues with Japanese saws ? 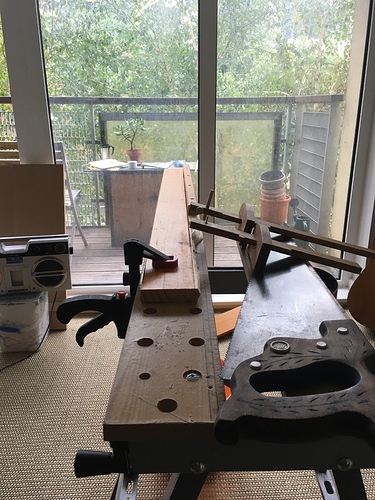 image.jpg3024×4032 3.3 MB
I have just made a lovely rip cut with a Disston which I renovated having purchased dirt cheap. I am focusing on my sawing very much as it is my weakest hand skill. I got to use my lovely pencil marking guage which I made specifically for this task. The saw is on my second sharpening and it’s really made a huge leap in performance. The previous owner didn’t know what they were doing and they tried hard to ruin the saw. The spacing has been messed up on a couple of teeth. I am not re cutting the teeth. The saw functions great as it is. This cut is aided by the strip of wood on the side. It’s exactly the right distance to give me a 3 inch board. I am making a shaker peg rail for my hallway. It’s a skip find, southern yellow pine is pleasant to work with hand tools. I am painting the board with real milk paint which I make from milk. I will leave the maple pegs natural. It’s a synchronous event, finding a piece of wood which is almost already marked out to provide me with a 3 inch peg board. The actual size shown in my book of measured drawings.
2 Likes
LuptonM (Marc Lupton) 20 August 2020 17:43 #4

I think saws are a very personal thing.

I do think Japanese tools do seem to get a bit of hype as they are seen as exotic.

Personally I am a fan of western saws. However the quality of them have rapidly declined since the 1900s. Any higher end modern recreations are based on those made from before this era. Useable examples from this period are far between and often the blade is kinked and pitted deeply

You can always buy an old beaten saw from this period. As long as the spine is fine you have yourself a saw kit as you can buy new saw blades from fine tools and you can always make a new handle

Japanese saws definitely look cool but I am not interested in how they look. My Disston rip saw cost me ten pounds and it is a really good saw. They sell for fifty quid plus on eBay. I need two more back saws and I would really like to buy more old saws but I am fearful of buying online because there is some risk involved. I will probably buy a flush cut saw at some point but I doubt I will be buying anymore Japanese saws after that.
I am making a donkeys ear at the moment, a true version for making boxes with mitres. I am using a piece of pine for the bed. It’s got a shake in it, so I thought I would try a couple of dovetail key’s. All looking good so far.

How is the guitar coming?

Car boots are probably the best place to find old saws at reasonable prices. I think I the disston saw you bought there was the first saw I got at a car boot. When I was starting out I did buy a few and try and get some of them ship shape.

Here’s an example. Think I payed about 50p or £1. It’s was a complete wreck. Blade was unsuable and the handle had woodworm. I ended up replacing the blade and treating the handle.

Still working on the guitar. Hoping to give the body a final coat this week or next depending on the weather. Then it’s just working on the neck. It’s taken a bit of a back seat to making the speaker cabinet having sold my last one.

Okay
So it’s possible to get new blades I wasn’t aware of that. It’s a very nice saw by the look of it. I found another good use for Japanese saws today. Cutting mdf I was quite surprised by how accurate I was able to saw over about 30 inches with a kataba crosscut.

The wood you used for the front of your guitar , was that maple? 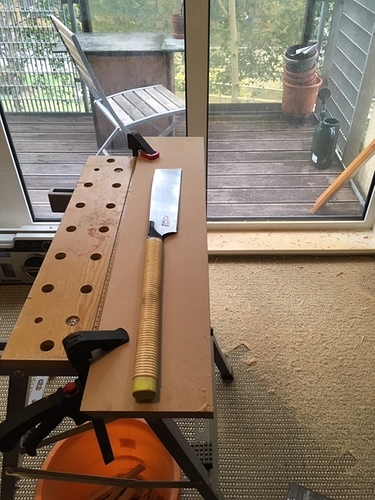 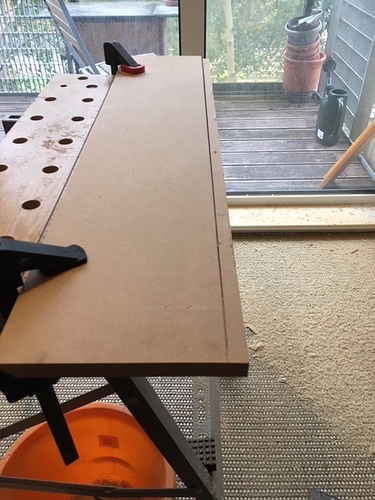 They sell some of it in Europe via fine tools

Nice,
I had a look and I will keep my eyes peeled for a 12 inch crosscut and a dovetail. The bolts really push the price up so an old saw seems like a good option.