As some of you will know, I won’t stop going on about how little space there is in my car.

Last night I decided I’d had enough, while waiting for some 3D printed parts (also car related) I got to work bringing my vision for a spacier boot to life!

The boot of my car has a removable floor, giving access to an under croft of polystyrene, with formed holes for tools etc - a complete waste of space if you ask me. 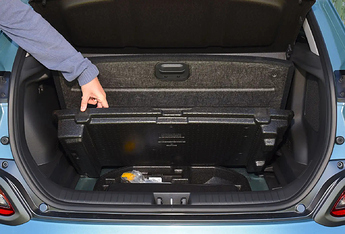 I had the marvellous idea of simply moving the shelf down closer to the chassis of the car - I wanted this to be reversible in case we sell the car in the future, so all OEM parts to remain untouched.

After some initial rough measuring, I used some spare OSB (Thanks) and got to cutting.

I thought originally that I’d cut a door to access the wheel well, but the OSB wasn’t wide enough to cover the full space, but as it’s tongue and groove it literally comes with a built-in hinge.

Before the new floor - with the OEM floor in the standard position:

This’ll do for this first iteration - I do want to carpet it, which will mean taking off another ~10mm off of all edges and wrapping it with something that won’t scratch, and will prevent things sliding around in the boot.

But until then, I’m so happy with the result, and the join of the tongue and groove allows the board at the front to be lifted to access the additional space in the wheel well.