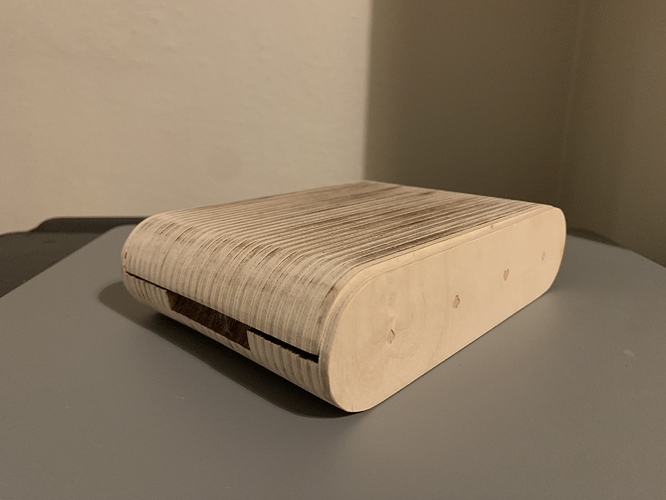 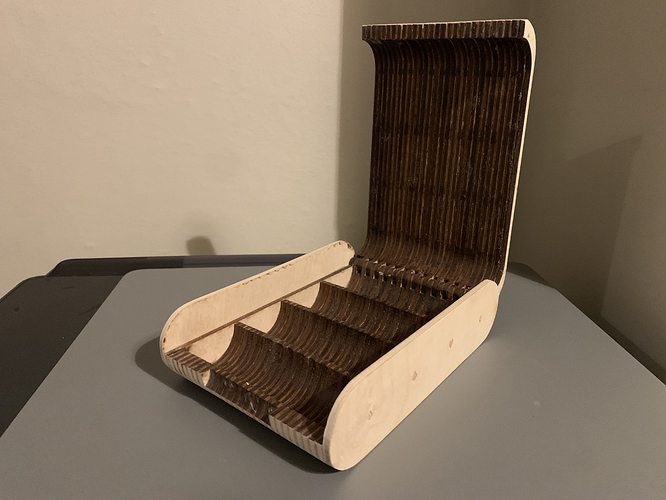 Not quite finished yet but it makes sense at least. I wanted something to consolidate my newly learned skills on the laser cutter, and I’ve been playing a bit of poker recently… so why not. I also liked the idea that if you were to cut out some poker chips, the negative space left could form the chip holder so you have very little waste.

In terms of cementing the laser workflow in ruby, I think I’ve succeeded, especially since I had to have a few attempts to get it right (novice tip: never move the material off the bed until you’re 100% sure it’s cut all the way through…). My main learning there is essentially don’t try to be clever with ruby, even combining multiple shapes within seems to be tricky and it’s easiest just to get your entire layout done in whatever vector programme you use and bring it in.

In terms of the overall product workflow for making these types of things with a laser my main 2 learnings in terms of the process:

Some images of the process 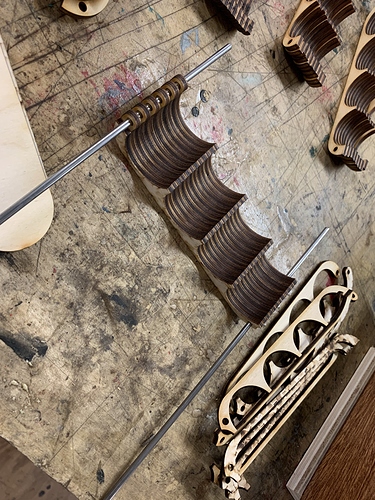 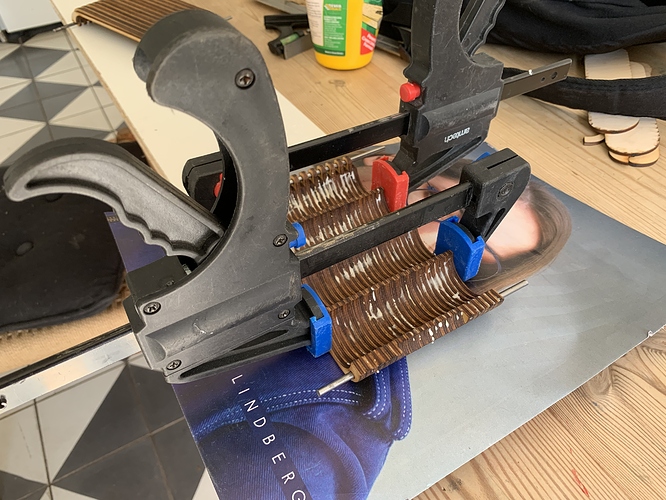 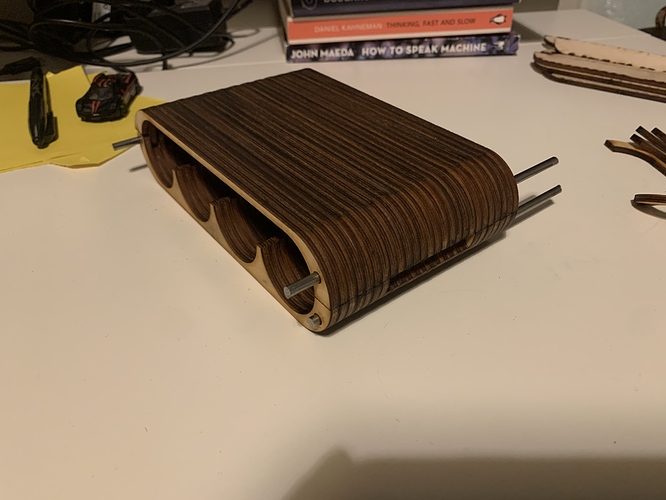 Both of the above points to me seem to take away from the power of using a laser cutter. If I end up spending far longer wrestling the result than it takes to cut, almost to the point where I wonder if it would have taken the same time overall to cut with other tools, I’m doing something wrong.

All that to me says if I want to use it I should adjust my expectations about the end result so that they work with the process, rather than against it. I.e. maybe I don’t try to remove the burn entirely and either accept it, make it a feature, or cover it with paint or stain. And maybe glue is not the right way to fix it, maybe some small fixtures or connecting pieces.

Any advice on gluing, treating, post cutting with a laser very welcome.

Anyway, I’ve really enjoyed it and it gives me loads of ideas for future projects. Thanks to @Brendon_Hatcher for the great induction and tips along the way and also to Steve (the @ isn’t working) for help.

that;s really nice, i imagine it smells terribly though, but otherwise very cool.

i wish i could remember the product but there was a spray in an orange color bottle that had a nice scent but could also clear away the burnt edges. i’ll try to see if i can find it.

seems to be american, but essentially the recommendation back in the day was to use this to clean it up.

ah, found a few references to it online perhaps it’ll at least give you something to rabbithole on.

It is definitely pungent… thanks for the tip! I’ll read up about that

Hi, if you meant me it is @smjmaker

I did… @s wasn’t giving me anything… anyway thanks!

Yeah, it’s a background call to the server so can sometimes lag a bit, usually works if you reload the page or wait a few moments…

I like that you cut out all the chips from the same stuff. Poker chips in plywood work perfectly well, but it’s nice to have something with a bit more weight; have you tried adding weights into them? Have you also got any pictures of the chips as well if you made some?

Hi Alex, yes I didn’t include the chips - I don’t really know what to do with them tbh. Here is a picture, some plain, some with a paint trial 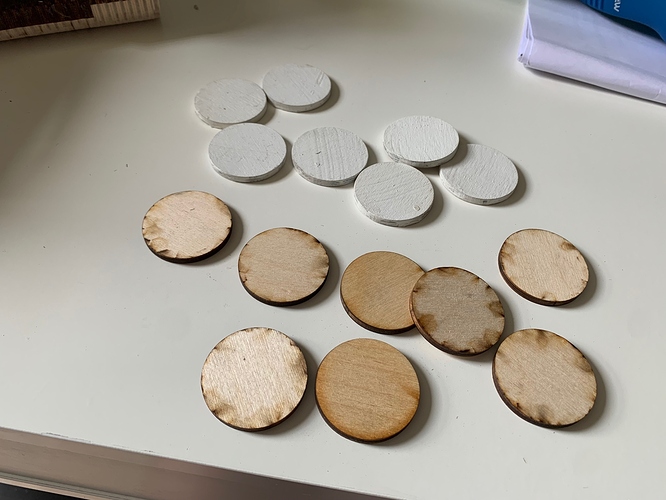 I thought I could just paint them but
a) its fiddly
b) it doesn’t look great in my opinion
c) as you say, on reflection I think they need to have a bit more substance to them, others have made the same comment.

I’m wondering about some kind of lacquer - the only thing is it will end up adding to the overall dimension, as you can see right now they are perfectly snug, 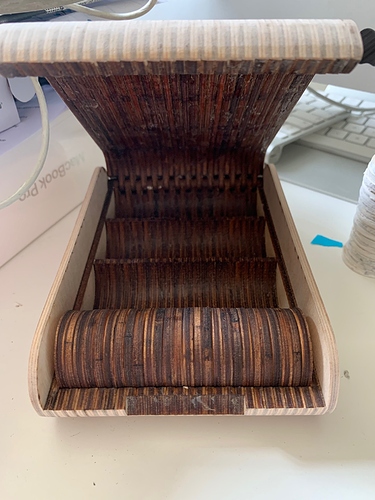 I will end up having to lose more material to begin with, which is more waste but I think I need to get past that ideological point

You could make the chips double thickness, where half of it is an “o” shape, and then put a coloured metal disc into the space. Same thickness or less than one ply sheet.

Might end up with excessively thick chips though, and yes you’d lose the centre of the o’s. Use the thinnest ply you can and make some stylised lettering out of the holes for the outside of the box?

Nice post… good to see your process too. Maybe you could cut the dry glue w/ a small knife or dremmel rather than sanding it down?

In fact you could use the dremmel w/ a rotating sanding head to get rid of all the burnt stuff inside.

Cleaning up always takes a bit of time… don’t worry about that. See it as a “life-tax”

I hadn’t thought of using a knife… and I had never heard of a dremmel - thanks for the tips! Glad I shared

https://www.dremel.com/gb/en/product-lines/diy yeah… dremmels are handy! Like a tiny power tool. We have one in the space! Just ask someone to show you next time you’re in.