Easy for the Electronics people 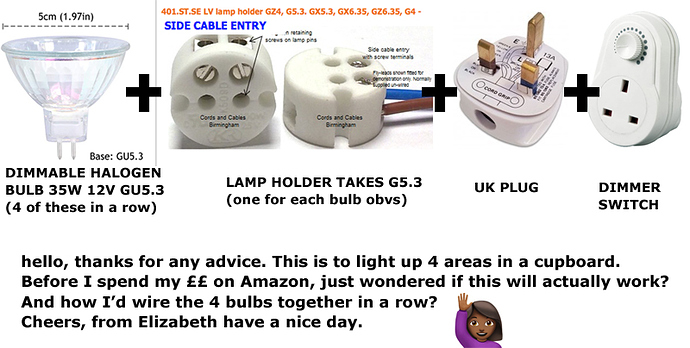 Hello all, hope all’s well. Here’s a pic of 4 bulbs with sockets and dimmer switch. If anyone has a moment or two for advice that’d be great.

Four of these halogen would create a fair bit of heat between them, especially in an enclosed space. Is that part of the plan? If not you would be much better off with dimmable LED.

If you do want to use the bulbs shown you will need a transformer. Perhaps you have one already though I am guessing not. The transformer would need to be powerful enough to power four bulbs of that wattage.

Those holders are also designed to be housed in something rather than used as is. Safety being the main factor on that front.

Have you considered off the shelf components? Screwfix or Toolstation for example do some very reasonably priced lightfittings of this type i.e. https://www.screwfix.com/p/brilliant-loona-gu10-led-wall-light-satin-chrome-3w-240v/4564j

You can also often get them secondhand on Freecycle etc if you are not in a desperate hurry.

Of course if the lights are only on for a brief time i.e. when going in the cupboard for something then the heat factor is not so much of an issue. That begs the question though why the need for a dimmer?

Personally I go for LED these days wherever I can and usually get from Toolstation or Screwfix. Great value and decent quality I find.

Toolstation also do a very nice GU10 holder at a great price if you still want to keep things basic though this is also really designed to go in some kind of housing - https://www.toolstation.com/spare-lampholder/p93364?store=GJ&utm_source=googleshopping&utm_medium=feed&utm_campaign=googleshoppingfeed&gclid=CjwKCAiAp4KCBhB6EiwAxRxbpKvK84d2Ud-mioQhZmQ99zJcHi32ornQacKfcSczWQyGwTzod6lYzhoCSSsQAvD_BwE#

Hi Nick that’s really helpful. Yes I do want them to be dimmable, the example link you gave me, the bulb is 3v and I’d like around 5-7V. Also the shape isn’t right for me… The link below: what do you think about these strip lights, they are LED as you said, and also dimmable, and I can cut them to different sizes apparently:

LED strip tape provides a continuous array of light that can be cut down to the exact size you require. It can also be extended to infinitely longer lengths by integrating additional accessories and LED drivers into the run. The versatility of LED...

Here’s the dimmable ‘driver’, that they say is compatible with it, that can attach to an ordinary dimmer switch do you think I could use this?

PowerLED Triac dimmable LED drivers that can be dimmed using a mains dimmer switch. The dimmer switch must be LED compatible such as Varilight V-Pro (up to 120W) or Varilight V-Com (up to 600W). Suitable for dimming LED tape and many other LED lights...

I don’t have experience of these strips I’m afraid Elizabeth however I suspect they are more decorative than functional - certainly in comparison to the first bulb you showed anyway.

That said it’s entirely possible that they are prefect for the job but without knowing more details it’s hard to say.

Perhaps a better approach would be to define the project and desired outcomes in order that solutions could be proposed? 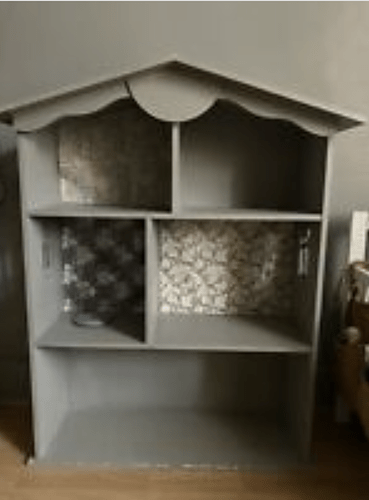 Ah OK. Well that’s certainly quite a bit different to what I’d imagined. I thought you were talking about a walk-in cupboard or something like that.

This is more of a cabinet in my view. I would do a search for ‘cabinet/bookcase lighting’ to start with in order to get some ideas.

Personally I think the led strip lighting is heading in more appropriate direction than what you were intially thinking of. Here is an example of what you might be looking at - https://www.ikea.com/gb/en/p/ledberg-led-lighting-strip-white-10400936/

Btw re the dimming element. Are you wanting to adjust the lighting levels for different scenarios or is the dimming feature merely to set the level and then leave it at that? If the latter then you would be best to try and design a setup that gives you a satisfactory result and leave the dimer out. That way it keeps things as simple as possible - and also of course keeps costs down.

Oh and another btw. You are confusing Volts with Watts I think – on ‘paper’ at least

Hi @Elizabeth99,
I have bought several led strips and other LEDs from aliexpress, you surely can find them on ebay and other places. What I like about them is they are fairly cheap and almost always come with a controller that controls colours and dim. This link is for a random led strip with a controller https://www.aliexpress.com/item/32742099906.html

you can search there for ‘led strip with a controller’ and see other options, usually comes in 2, 5 and 10 metres and you can cut them at the copper connections to lenghts you need and solder them back too. They tend to come with USB and also other plugs that run on normal 5V (or higher) but that is something that can be inserted in the search words.

What i think is good about 5V and USB is that USB wall plugs and sockets are vastly available for most people who use smart phones.

edit PS: You can buy higher quality ones that come with a gelly-sort of covering of the whole strip that prevents shorting if the separate connections touch when turned on. They tend to be more expensive, around 25£ or more.

Thankyou!! I’m getting there…