Broken Arduino - is it fixable?

I seem to have broken an Arduino Uno. When I plug in the USB cable, the ‘501V’ component between the USB socket and the voltage regulator heats up excessively and the ‘ON’ LED gradually fades out at the same time. 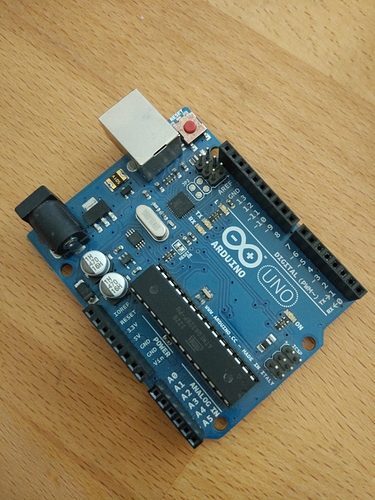 The Arduino isn’t recognised by the computer. If I touch the 501V component (EDIT: turns out this is the USB polyfuse) the LED comes back on, presumably because my finger acts as a heatsink.

Anyone have an idea what is wrong with it and if it’s fixable?

Related question - are the cheap Arduino clones with SMD ATmega328Ps generally reliable? Is there any technical advantage to buying original Arduinos, other than the worthwhile one of supporting the designers of course?

I have used several of the cheap clones and they are generally reliable - many of them are built with the same circuit as the official Arduino, so there is often no technical advantage. For best compatibility, keep to the ones with “good” USB interface chips (which these days, means they use the same Atmega16U2 as your Uno)

It sounds like your board has a shirt-circuit. If you have not done any soldering or got anything stuck on the board to cause that, then it is unlikely to be repairable. It is possible that you simply have something wrong with the USB interface, at which point the main Arduino part could still be usable - in a more awkwardly programmable fashion.

You probably shorted 5v and GND while experimenting with it and the polyfuse just went in protection.

It’s a 500 mA polyfuse so you can source one frome ebay and swap it or YOLO it and just remove it. I advice you for the first one.

Original Arduino are expensive but the quality of the PCB and components it’s superior to the clones, I had my Diecimila for ever.

I have a new board ordered but I will have a go at replacing the fuse on the dodgy one and see if I can revive it.

It’s possible that the short is still there if the polyfuse keeps kicking in - according to the official docs it’s supposed to be a PTC thermistor but cheap clones may have substituted in a one-shot fuse. (On a related note, I had a Nano clone fail once because the USB polarity protection diode burned out, pop a new diode on and it worked just fine)

but that’s not a clone