Repurposing post as a resource for everything gathered in the thread below around DIY faceshields: please let us know of any projects/resources that you think should be here. If you get a useful link please have a read, give a quick summary if possible and share below. This is a rapidly changing landscape, and medics across the world are gladly accepting DIY PPE. Let’s share evidence of the best, safest and makable!

Production projects – but can be done at home too

Barchworks:
Newsflash: £15k crowdfunder is live!
Batch Works in London @Julien_Vaissieres is starting volume production (now?) of a pared-down-fast-print version of the [Prusa shield] (https://www.prusaprinters.org/prints/25857-prusa-protective-face-shield-rc2) at their 3d Print farm
Another fundraiser – this time crowdsourcing people to do the 3d printing
3D Crowd Uk

Suppliers
Some possible suppliers in Post #22 and http://psggroup.info/ – anyone have up to date info here?

http://www.spacehive.com/create made contact and suggested projects like these could fit the currently relaxed criteria. Advice is to click the link and start creating a campaign. They don’t do match funding but have orgs who chip in on campaigns…have a read

I like the idea and have been following the prusa design since t beginning. Abs or PETG would be better for strength and durability. Where would we get a load of Sheet material for the visor part? Is this a drive for a makerspace collaboration for a single donation?

can’t we print one and cast the rest? 5h of printing it’s not fast enough!

Don’t get me wrong but is this really the best way to go about to procure face shield. I’ve been contacted as well and everyone think this is going to help.

The prusa use case was suitable especially to the situation in there country, the fact that prusa as 300 printers farm at their disposal,I understand that panic buying as caused shortage and based on a quick search this is currently not the case around here however I’ve got other concern regarding doing this.

Finally IMHO what is going to help is self isolating from any contact reduce the amount of any movement that is personal or goods that can occur. If everyone follow those guideline as demonstrated in asian country within 3 month the situation get in controlled but if we increase the amount of possible cross contamination we are likely to make the situation much worse.

So again don’t get me wrong but let’s consider this carefully and not jump into doing something that we might regret.

ps: @Jonathan is right those will need to be printed in PETG for best results but if you do them in other material they could still be useful
@emuboy as valid point about casting assuming the design provided is suitable

I’m in if needed, know how to 3d print too.
I still work so meeting people, keeping distance but need you to know.

can’t we print one and cast the rest? 5h of printing it’s not fast enough!

As I said – let’s see if we’re asked. The fact that other workshops have been directly requested to help is why I posted today

I really hope there are enough visors

I’ve been working full time on this effort since the weekend. The Prusa shield is well intentioned and getting lots of interest, but the print time is too long and it can’t be scaled up very quickly. Prusa with their huge printer farm could produce only a few 1000s per week. We need to go much larger than that.

There are some non-printed designs, the best of which looks like this version:

They have an assembly guide here:

I’m in discussions with several large UK companies with the resources to produce these at large volumes. We may have a fallback/parallel track where we get makerspaces/individuals to help laser cut (or manually cut) the shields, foam and assemble them.

We may also be doing a crowdfunder to get cash to buy the materials and pay for the production.

By all means start printing prusa designs, but for short term we might be better looking at this version which uses A4 material sheets and so doesn’t need a laser cutter: 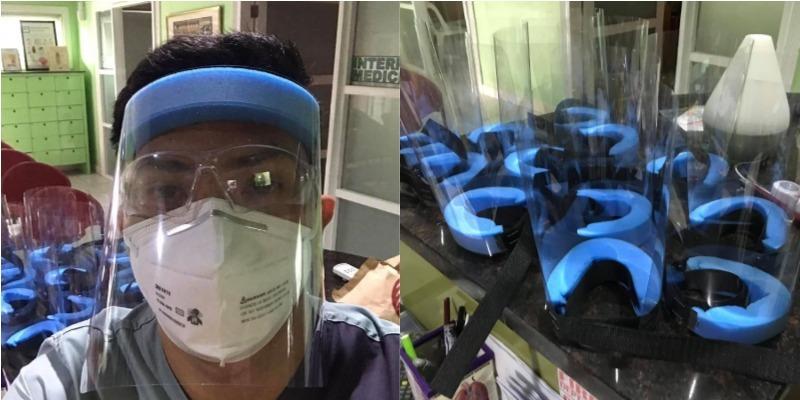 Spending only P20 for each face shield, Clement Vanrich Monreal came up with this DIY project to help medical staff.

This second version uses velcro at the back, but the feedback from clinicians was that they would prefer a single handed operation - the first one has an elastic band

I’ve been working full time on this effort since the weekend.

Good man! I’m all for efficiency and buildability!

What kind of numbers are we looking at?

I’ve been asked about producing masks for a hospital in Cambridge, by three seperate parts of the hospital. I made the Prusa design yesterday evening and have shipped it over to them for feedback, but I’m regretting it now as the Wisconsin design looks much better suited to what they need. They’ve said paying for materials is no problem, so we shouldn’t need a kickstarter to get going here.
Have you found UK suppliers for small quantities, so we can get a batch made and distributed for review, whilst you’re working on volume production?
Earlier today I ordered some 0.5mm, 0.7mm, 1.0mm and 1.5mm PETG from bayplastics, but these instructions call for 0.007" so 0.18mm, bayplastics didn’t have it that thin.
Mark

That’s like a thick piece of paper…so maybe it’s more ‘film’ that you’d be looking for?

yes, its about the same thickness as OHP or binding plastic, but PETG is much stiffer than the PPC/PVC/PS they’re usually made from.

So…from a brief Google that thickness of PETG is possibly used for vacuum forming product packaging? So food and other manufacturers might be the people to ask - or the people who vacuum form their packaging?

Or is everyone way ahead here?

I’ve been looking there, but still can’t find it in small quantities. it must be available though

What about asking for samples? And the fact that @barrylillis is look at this at scale

So Batch Works in london are also working on the Prusa deisgn, (but a quicker print) – also looking for plastic for thousands of shields, so let’s share the knowledge