In the space now doing some work on the laser cutter, was pretty disappointed in the state that it was left in @lasers & @lasertechs . Didn’t look like anyone had cleaned the bottom tray or inner sides for months!

Lets try work on this a bit better aye?.. 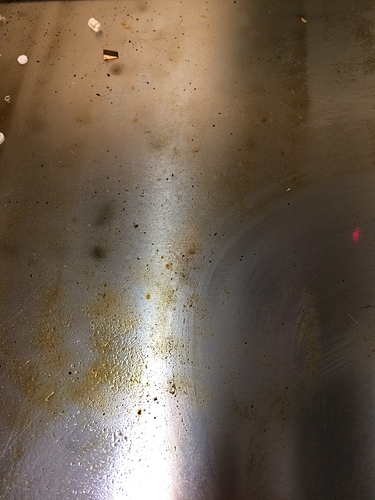 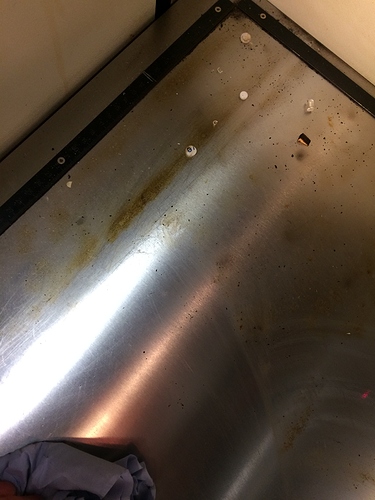 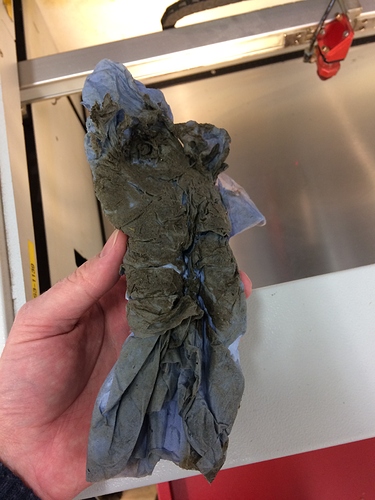 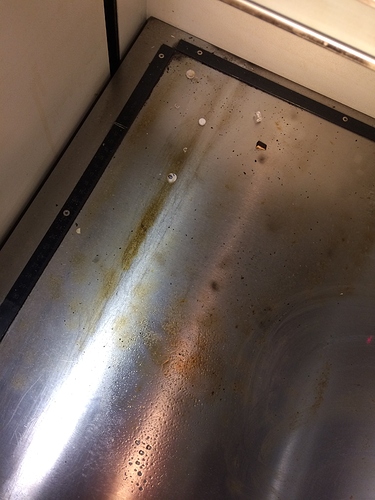 while I do agree with you that maintaining the laser in the best possible condition is a priority, I can assure out that the laser gets really dirty very quickly. What I can see from your pic is about half of the dirt I would get after 30 minutes of cutting. I was doing work on it in mid December and I cleaned it several times during 3 or 4 sessions.

Again, I agree with you that the laser should be cleaned by every user after every session.

the laser cutter was used last night to cut a bunch of stuff without the extraction been on.
There was a fair amount of smoke and it probably dirtied it a fair bit.
The reason the extractor wasnt on was because, even though they turned the dial near the metal
work area to 100, the plug marked “laser” wasnt turned on at the socket. i dont think this was in the wiki, not sure if it was in the induction

Joe and I made it so that now, all you got to do is turn that socket on, there are instructions on the laser cutter now as a cheat sheet, and there are plenty of notes on all the points, plugs, sockets to try and prevent people from unplugging, dismantling this.
right now, it is probably the most straight forward way to do this.

if we stick with this the wiki needs updating, and longer term we prob need a clean one button solution @lasertechs ?
Also, maybe replacing part of the extraction system with a clear pipe instead of a metal pipe, and putting some streamers in there so people can easily tell if they have turned on the extraction.
right now the other fan can be on in the room and it sounds like the extraction is on even when it isnt (which was happened last night to a member)

kostas did a great job today tidying the laser material area, he left the small bits there, but they should probably be chucked @lasertechs ?
Also, we prob need a system to make sure this happens regularly, it was not on the tidy side to say the least, prob hadnt been rationalised for a while

Not using the extraction should frankly count as a safety near miss.

The laser extract makes a pretty big racket, its hard to miss if its not on. Having witnessed the overhead extract being off the smell is also pretty strong.

If I’m not mistaken a failsafe is in the works for this ?

im pretty ignorant cos i haven’t done induction, fail safe sounds cool, do we have a spec that we can put out there for someone to project manage/do?
the only system we have for getting people to undertake periodic maintenance/cleaning of anything is whiteboard system in the toilet, it sort of seems to be working?!
could we use this for laser cutter/other areas in the absence of something else?

Cleaning the cutter is part of using it.

The tool management system is already in progress. It was implemented in the laser cutter previously. Not sure I remember what its fate was…

is having the cleaning in the induction enough to keep it clean going forwards? if not, what can we try.

Yes. The induction states that all surfaces should be cleaned, including the bed

The induction I had was with @tomnewsom who showed us how to clean the laser cutter properly.

Cleaning it when you want to use it isn’t enough obviously. Cleaning it after using it is vital to the induction too surely?

Speaking of cleaning the laser cutter, we seem to be almost out of cotton bud for lens cleaning. Is there a place where spares are kept?

Esther, on a very different post, you didn’t get back to me about Time to Talk so post me there

To be fair, I only learned about how to turn on the laser cutter extraction on Friday cus I was there when someone was using it and they didn’t know either.

That vital information now needs to be part of the Induction too. Also needs to be put on the wiki info and an all members link.

Anyone can edit that wiki

Yes, we can wiki but it is not an update in true form because wiki is currently not a part of information that reaches all members when updated.

The huge difference is absolutely not the same thing as Protocols in Place as part of every induction. Which need to constantly updated and the updates posted to all members, every time.

Every thing in Maker Space is a blessing to all members. To take care of all things is respectful.

Not knowing how to use it is a safety infraction for all of us. Currently I just know that the doors should be closed and that’s because of the induction I had. I would never have known that. I have no experience of a laser cutter and don’t know the true implications of regular use of it by me or anyone else. I’m sure those who do understand this and take care of themselves and everyone else.

Theres about 3 boxes I believe behind the Laser cutter next to the computer tower, on the wooden shelf.

Hi I’m afraid it was me in the space on Friday cutting with the extract off.

When I did the induction the extract was a standing unit next to the laser cutter so I must have missed the update when it was replaced. When turning the switch by the metal work area I heard something start up and just assumed it was quieter than I remembered from the induction, then while cutting the smoke was clearly leaving through the vents at the back so it looked like it was working and I didn’t notice the smell building up until Conor came in and noted it. A cheat sheet by the machine sounds really helpful.

The cleaning was definitely well covered in the induction and while I cleaned the outside, the mirror and the lense before during and after, ashamed to say I forgot to look at the bottom tray and sides, so this is my fault not the induction. I was referencing a pre use checklist on the computer similar to this (Laser Cutter - Trotec Speedy 300) but it doesn’t cover the cleaning so including it on the cheat sheet by the machine would be a good reminder.

Hi Tom, thanks for clearing up the mystery!

Yes, the extraction is in a state of flux: I’ve used the laser cutter accidentally without the extract on because of different users switching off different parts of the system in different places too, and the fact of it being rearranged several times.

Sounds like Conor and Joe have put in place a good system to tide us over with a cheat sheet and clearly marked plugs.