Black lives matter and that sort of thing

All the current debates about racism in the media has Sparks conversation with in the makerspace, I think it would be really positive if the makerspace did something tangible to make the point very clearly that we are an equal opportunity space.

I have been a field engineer working in London for 30 years always in very racially diverse teams and I know from experience that carrying a bag of tools or a bag of wires is significantly more complicated if you’re not white. So I would like to propose that the makerspace invests in an ID card printer so if members choose to have a photo ID card instead of a tag ,they can ( as a photographic ID card is a quick and easy way of getting out of police search). I think we could also afford to allocate a small amount of space for project storage for non middle-class white members without cars. As that would alleviate the need to carry projects to and from the space.

We can’t do anything about the inherent racism of the police but we can help alleviate the symptoms and and make life a little easier for some of our members and it will also serve as a physical statement that our commitment is a diverse community.

I also think that we should include young working class white lads as they get busted for equipped as much as non white lads I would like to point out that this finals point is definitely NOT " all lives matter " as the all lives matter movement is a Revolting front for racism.

I don’t think there is any less “Joe” post about anything in the entire universe. Thank you.

Thanks Joe for bringing all of this up.
I totally support any policies that make our space more inclusive and would be very interested to hear more voices in the conversation.

The conversion has started with a wide range of voices at the meeting last Saturday. There’ll be a post on it soon with a whole bunch of ideas to discuss and investigate. This will be a long term endeavour, and more and more people will contribute as it grows

I really like the observations you’ve made, and actually think you’ve landed on an interesting point.

Organisations often say they’re “an equal opportunities employer” but the outcomes are still different, and interventions like that you’ve suggested can help an organisation move from equality towards equity: 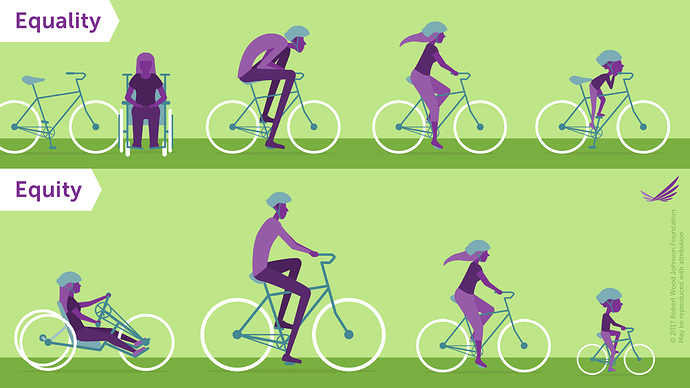 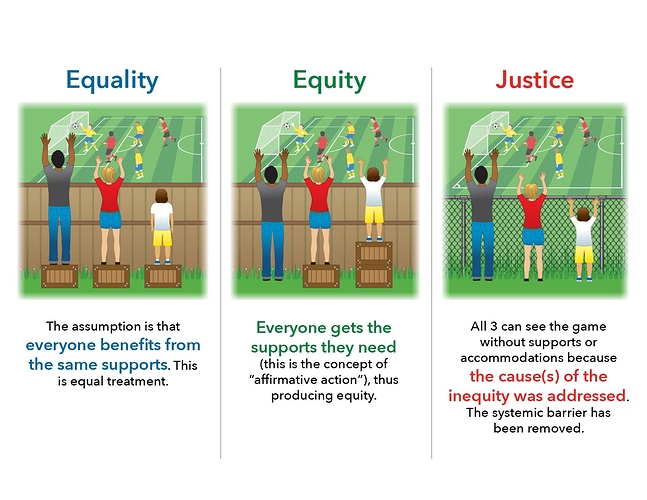 Yes @joeatkin2! Thanks for posting. There were a bunch of us on the most recent call we had about racism and how we as the space want to address it. However many more women than men joined so would be nice to have some more men get involved with the conversation! Info has been posted on discourse for members to engage with and follow ups are coming, as Dermot mentioned.

Thanks @unknowndomain for that image including ‘justice’. I’ve seen a bunch of variations of those images but never including justice!

This is sort of relevant, well in my brain anyway